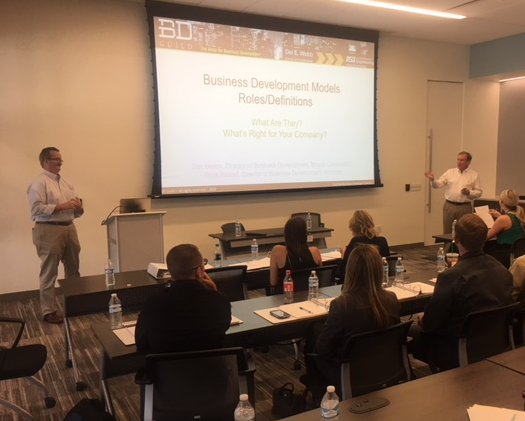 Module One began with a gentle introduction to what turns out to be pretty technical information on long game public sector pursuits in Arizona. Sandy Werthman, Partner at SHS Technologies, delivered a high-level overview of the strategic approach used to secure the design and construction of the T3 terminal expansion at Phoenix Sky Harbor Airport. When you’re part of a team that’s trying to secure a billion dollar project, that has been on the radar for nearly a decade, things apparently get really interesting. It becomes more complex and challenging very quickly as the formal part of the pursuit materializes. Design firms included SmithGroupJJR, Corgan, and DWL Architects. Nicole Snyder, who was Director of Marketing & Business Development at DWL at the time, (currently at Devenney Group) co-hosted the module with Sandy and they discussed complexities of choosing subcontractors, consultants, and strategic partnerships for this project. With over 100 trade subcontractors contributing scope to a detailed approach, could everyone on the team be trusted with secret developments in research and design? The race to win was on. The contractor, HuntAustin, was a unique solution proposed to the city due to the overall value and bond capacity a joint venture between these two Phoenix-fluent firms would bring.

Executive business development roles from each firm came together with structure to their strategy, even bringing the best versions of themselves to the table with presentation and interview training. They brought in a tenured AEC communications consultant from out of state, who worked with technical roles on impactful timing in conversation, the smooth delivery of important points, as well as bringing their personality through at the appropriate times. For the scope of work being the size it was, the interview was only a nerve-racking 20 minutes long. Differentiators included clear emotional messaging throughout their materials, storytelling, clean vector graphics, and use of technology and brevity in the interview. They (of course) had professional video with a personal touch, and a small matching leave behind with key data only.

The video was only a minute or two long, but told a big, bold story through images that said several sentences worth of information in just a fleeting image. The text that scrolled across the images was mainly short impact statements that really left it to the viewer to be moved independently by each point. The small leave behind was economically printed, had only key data points, and matched the presentation overall, giving the brand impression of a thoughtfully professional and conservative decision maker. That paired with the communications and interview training, as well as enthusiasm that could not be contained, really crossed the finish line first. Like I said, this BD Guild module was delivered years after the pursuit, however both Nicole and Sandy still spoke passionately and energetically about the project like they had just won.

One of the interesting points made about this pursuit is that forecasting the need for the airport expansion project, years in advance, was made relatively easy by being knowledgeable about the city’s Capital Improvement Plan (CIP) and reviewing it annually, which includes detailed line item budgets for items like infrastructure and roadway improvements that would expand the areas around the airport and prepare for the expansion to take place. It didn’t take a mysteriously inclusive relationship with a city engineer or secret information to know this was a viable opportunity coming down the pipeline. Because of their past history with the client and similar work, and since they remained visible, interested, available, and focused, their respective firms were top contenders to compete.

More about conducting industry research will be in Module Two.

The bottom line…it’s not great players that win but great teams.

The project scope itself was so astronomical, it began almost 5 years ago and continues to this day. While the average AEC business developer may not ever be a part of securing a project of this size, there is so much to learn from the business development long game this pursuit required. The second half of the module, led by Rock Rickert, Director of Business Development at Archicon, and Don Helton, Director of Business Development at Brycon Construction, rounded out the details of how business developers who are boots on the ground roles can identify opportunities of all sizes, where to look for mentorship and leadership roles such as board service, and how to work with your marketing and operations roles to become a cohesive team, ready for the big leagues. The presentation gave an illustration on how business development works with operations and marketing during fires as well as in general throughout the year. Understanding everyone’s roles, incentives, goals, and aspirations all come together to get what you want from your team and ultimately achieve client-oriented results.